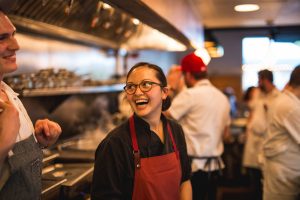 While Cara grew up making Shanghainese classics alongside her mother Cecile in a kitchen infused with ginger and shaoxing wine, her training is far more global. Beginning her career at 16, she worked in Berkeley and Philadelphia before heading to Paris to hone her fine dining skills.

It was at this time that Cara began noticing what has become her core guiding concept – what she calls “the perfect bite.” Specifically, she became fascinated with how, in a single bite, flavors harmonize in a sequence of moments, supported by the cadence of texture. Since then, Cara is constantly striving to put both new “perfect bites” and some classics on the table. With the aim of finding more flavors and texture to bring to this concept, she headed to Asia in 2008, working in Singapore, Beijing, and Shanghai.

Cara returned to the U.S. in November 2011, eager to work with her mother to bring to Brunswick her unique twist of contemporary Asian fusion combined with the bounty of local Maine flavors. Tao Yuan Restaurant opened in May of 2012 as Cara and Cecile’s first full service restaurant. Three years later, Bao Bao Dumpling House was born, followed in 2018 by Lio Restaurant.  Cara was recognized as a Food and Wine Best New Chef in 2014. Each year since 2014 she has been nominated for James Beard Rising Star award, a nod to the industry’s future talent and leaders. 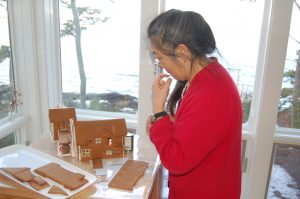 Building a scaled replica of her house in gingerbread

It might appear that moving from a 35 year career in high-tech to starting restaurants is a massive career shift, but the elements of what motivates Cecile are still the same – to create something that is greater than the sum of its parts.  Building a piece of technology requires working with much more than engineers.  Building a restaurant combines eclectic personalities and ingredients to deliver something that people find delicious.  Building an aquaponics greenhouse combines community, hospitality and technology – all elements of Cecile’s career that she remains passionate about.  When asked how she ended up in the restaurant business, she says “it is the culmination of a lifetime of building sandcastles at Popham Beach, and the best part is that I get to work with my daughter”. 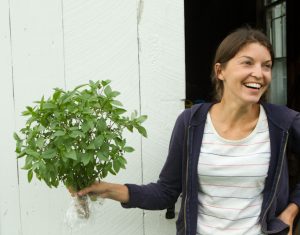 After farming in France, Virginia, and New York, Kate joined the project in 2013 when life-long friend Cara invited her to move to Maine and try to make an aquaponics greenhouse happen. Since then, she’s gotten to know and love the food industry by working in Cara’s restaurants. With experience in food education and an MBA concentrated in Sustainable Business from the University of Southern Maine, Kate’s looking forward to the challenge of synthesizing all these interests as the Director of Canopy Farms.

Ever since she was young, Jenna always had a love of being outdoors, whether it was target archery in her backyard in New York or wandering through the woods. She received her B.S. in Environmental Science from the University of Southern Maine in 2020 and has worked for a horse ranch in Colorado, as a park ranger for the State of Maine, and two non profits in the Northeast. She then landed at Canopy Farms where she gets to provide people with sustainable, delicious, and local produce, and is excited to see the farm and our mission grow to reach more people.